SIT IN THE HISTORY OF PICASSO’S GUERNICA 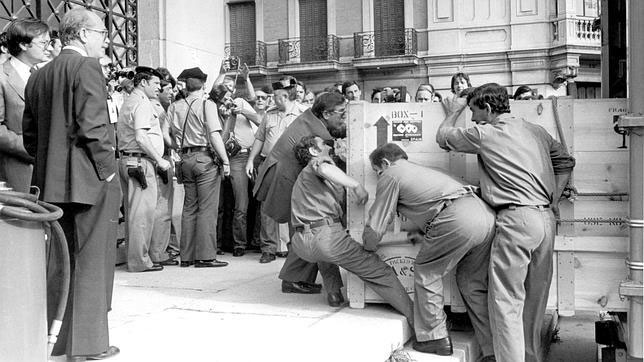 SIT is part of the eventful history of Pablo Picasso’s Guernica, perhaps the most iconic work of the 20th century.

This great poster -as the author liked to call it- was commissioned by the Government of the Republic for the Spanish pavilion of the International Exhibition of Paris in 1937 with the intention of showing one of the most ruthless chapters of the Civil War. After a long journey throughout Europe and America, it was installed – by express desire of the painter – at the Museum of Modern Art in New York, where it had to be maintained until the restoration of Democracy in Spain.

At 8.35 am on the 10th of September 1981, the iconic painting landed at the Barajas Airport (Madrid) as part of the Jumbo Lope de Vega’s cargo. SIT’s Art Team was commissioned to receive the canvas rolled by the curators of the MoMA, along with its 44 sketches in paper and canvas. Our trucks were escorted by the authorities to the Casón del Buen Retiro, where the Guernica was installed behind an armored glass and opened to the public after 44 years of waiting. This procedure was carried out under the strictest security measures because, at the end of the day, this simple gesture was considered a milestone of Democracy.

A decade later, in 1992, SIT returned to take charge of moving the Guernica again to its current location at the recently created Reina Sofía Art Center Museum. In this second moving, new preventive conservation techniques were used to take care of the piece’s fragile status, having to be transported in its frame without rolling and having to knock down a wall to be able to take it out of the building due to its large format. Moreover, SIT made a high security and protection special metallic box.

As our colleague Antonio Santos recalls, “what was proposed as an intimate, almost secret moving, became a multitudinous journey. This way the distance between the two points was made in more than an hour”, until depositing it in Room 206.06 of the Sabatini Building where it still lays today for the enjoyment of visitors.